I am a brand new Topaz AI user and imported a .TIFF image with transparency. The software works beautifully for reducing noise, but I can’t figure out how to export and preserve the transparency. Could you provide assistance?

I opened a support request but need to have this problem solved by tomorrow.

Thank you SO much!

I need to make some assumptions here because I’m not clear what you are asking. I understand you have a .TIFF image which has a transparency portion. Am I correctly assuming you want to take this into Topaz DeNoise AI, process it there and then save it back to your computer hard drive preserving the transparency the original image had? If so, I don’t see what the problem is. As long as you save it back to your hard drive as a .TIFF, or PSD file, it will be saved as in that format with the transparency unaffected. Are you perhaps trying to save it in some other format? If so, the only other format I can think of would be a DNG file. Any other format I can think of would automatically remove the transparency from the image when it is saved.

Terry, yes, that is correct. Here is a video of the issue I am having (saved to Dropbox, so click the link to view…not sure how to share video here).

OK, I’m going to take a few minutes or more to try and duplicate your results. I just did more or less what you just did, and accomplished it. I want to do it again using your steps and see what I did that you didn’t, or vice versa.

Alissa, the only difference and it appears to be a major one, is that I did mine all through Photoshop. I think you did yours through the stand alone DeNoise AI filter. I took a snip of your photo, created a mask in Photoshop and saved it as a TIFF image. I then pulled it back into Photoshop, and accessed the DeNoise filter from there. In other words I went up to filters, then down to DeNoise AI. Once the image was processed I hit the “Apply” button which took it back into Photoshop, and I saved it as a .TIFF from there.!
I did more work than you need to do. You already have the .TIFF transparency image. Just take it into Photoshop, go to filters, down to DeNoise. Once done hit “Apply” and when you are back in Photoshop, save it as a .TIFF. If you double click on it when you have it on your hard drive you will not see the transparency, it will be solid white background. Only when you pull it back in to Photoshop will you see the transparancy.

I tried, as you did, to do this within the stand-alone version of DeNoise AI, and it does not work there. I’m going to try and let someone know. It seems to be a bug. 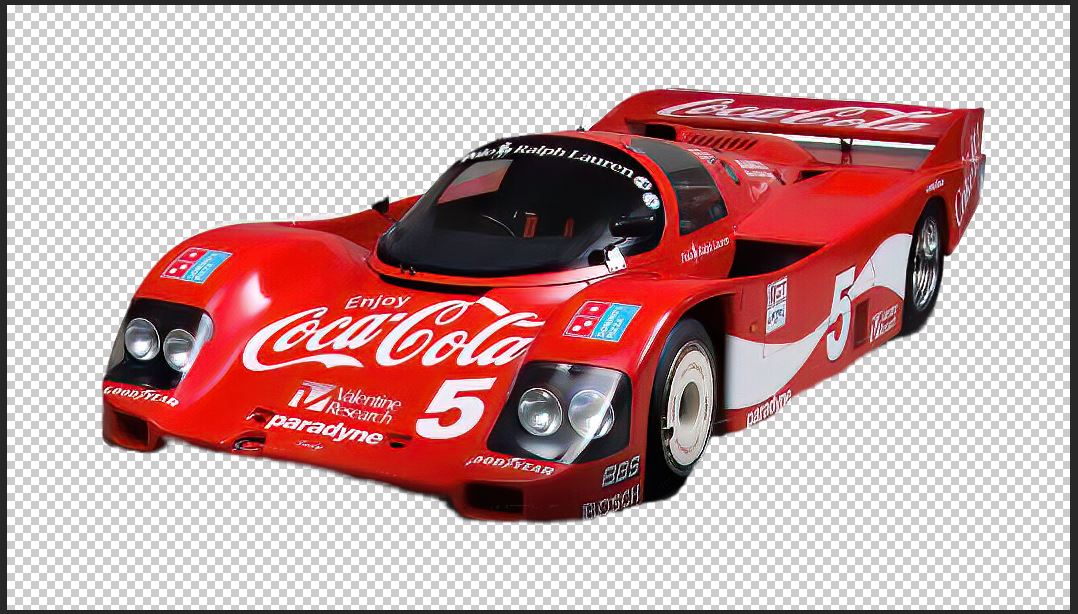 Sorry Paul, I Hit the “D” key instead of the “P” in PNG. If DeNoise AI is to be a stand-alone filter which it is, and Topaz also having Mask AI, it seems like it probably should be a feature of them both to handle transparencies. But I agree, my choice of “BUG” was not appropriate.

it seems like it probably should be a feature of them both to handle transparencies. 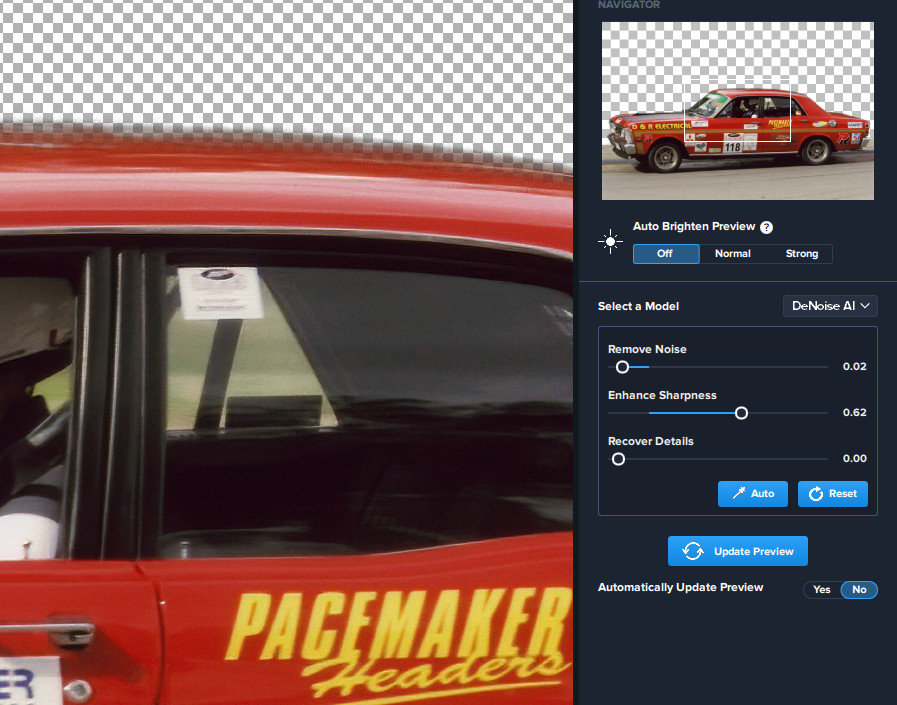 Hi Greyfox, I have no doubts you somehow were able to get DeNoise AI to save a transparency image. What I have a problem with, is that I can’t. Here are snips of the image with the transparency and the second after being pulled into DeNoise AI. Be sure to click on the second image to see the full image including the Denoise settings. 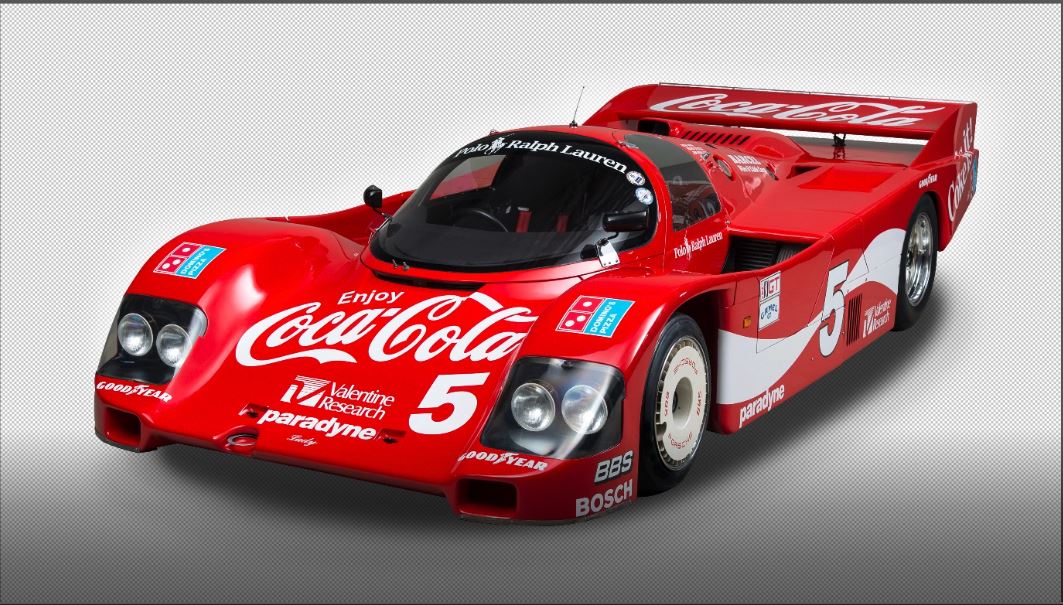 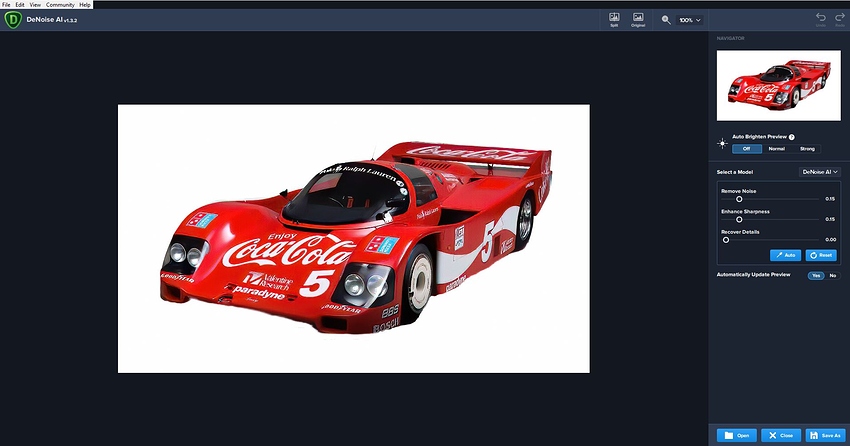 Terry, are you making sure to check “preserve transparency” when saving as a TIFF?

What I have a problem with, is that I can’t.

Hi Terry,
Your second screen shot shows that the image in DenoiseAI does not have the checkerboard pattern in either the navigator or the main screen, which leads me to believe that the area around the car is not actually transparent.

First can you confirm - is DeNoiseAI operating as a plugin or free standing.

If freestanding, what format is the image that has been opened in DenoiseAI - is it TIF/TIFF or PNG,

Hi Greyfox, yes, I was using DeNoiseAI as a stand-alone and working with a TIFF image. I was doing things way too quickly last night when I sent the info to you and sent the wrong snip. When I take the Transparent portion TIFF into DeNoise AI and process the image there I’m able to save it just fine. If I pull the image back into DeNoise AI it will still show the checkerboard pattern. The problem is when you attempt to take that image into Photoshop. It will not be imported with the transparent areas. It imports it as a solid white background.

Paul, I don’t see “preserve transparency” as an option. Can you tell me where I would find that? I’m sure that is the answer, I just don’t see where it is.

If you’re doing it in Photoshop it’s one of the options in the same dialogue box as the compression settings.

I’ve just done some more testing and found the same as you - opening the exported file in Photoshop does not maintain the transparency, but opening the same image in Affinity Photo, ON1 2020 and PSP 2020 does, as does re-opening it in Denoise AI.

Thanks for the confirmation Paul.

The transparecy issue goes back at least 2-4 months and is a bug that Topaz never fixed. I first found it with GigaPixel, where it showed as a problem first with PNG files that had transparency. Not all files had this problem, only some, for no known reason.

I had already isolated the problme to the step that writes the processed file to the output because the preview looks correct and the GigaPix program crashed just prior to writing the output file. This was confirmed by Tech Support.

I have since reported it to Tech Support and they were able to duplicate the problem, but never solved it. Prior to leaving he found a workaround to the PNG issue. This was to request a file conversions to TIFF instead of keeping it PNG. This worked really well. However, with the next update, the TIFF workaround stopped working and made the transparent regions opaque. Now every update beta or otherwise now has this BUG.

Unfortunately the Tech Support person who took this seriously and who duplicated it left so there is no one else working on this. I opened the ticket again, which is how I found it that the Tech Support fellow had left but no one had picked up on the unfinished problem and after several months never heard from Tech Support I sent a query about a week ago and still no response.

The most important message however is this:
This bug appears to be in every AI program (not Mask AI of course). Had someone fixed it right when it first appeared, it would have caused less confusion and frustration. Of course the fact that not all PNG and TIFF files have the problem makes it much more difficult to solve.

So if you have a file that fails to work, please open a Ticket and submit your errant file.

opening the exported file in Photoshop does not maintain the transparency, but opening the same image in Affinity Photo, ON1 2020 and PSP 2020 does, as does re-opening it in Denoise AI.

The problem isn’t with Photoshop though

Unfortunately this forum doesn’t provide the means to upload TIFF files, however the link below will enable you to download a file named Test.zip. It’s about 2528KB and contains two TIFF images, GTFALCON-A.TIFF and GTFALCON-B.TIFF.

Can you please extract the two TIFF files, open them in Photoshop and tell me whether either, neither or both show with transparency.