Here, then, is my “digital homage” to JMW Turner…

Joseph Mallord WillamTurner (1775-1851), for those of you who have never heard of him, was one of Britain’s premier landscape artists in the late 18th and early 19th centuries.

I first learned of Turner several years ago after I started photographing medieval ruins in the United Kingdom. Turner traveled Europe extensively during his career, and painted dozens of canvases depicting the ruins that Britain’s aristocracy were just beginning to preserve during that period, often turning them into parks on their estates. When I started researching the sites that I had visited in the spring of 2013, Turner started showing up in my web searches.

I was of course intrigued by the 2014 feature film “Mr. Turner” that portrayed the artist in the later years of his career.

When I returned to the UK in the spring of 2017, I sought out some of the locations that Turner had painted 200+ years earlier. My itinerary started in Chepstow, Wales (park car, see castle…), near the ruin of Tintern Abbey that Turner painted in 1794. I carried a file of his painting with me on my iPhone so that I could find and attempt to replicate his vantage point.

I did manage to find what I suspect was the spot where Turner stood when he painted the Abbey, though things look very different when viewed through an ultra-wide angle lens compared to a painter’s ability to render things has he sees fit. 200+ years can also do a lot to how a place looks; Turner’s paintings show ruins like Tintern in a native state, largely overgrown with vegetation. A lot of that growth has been pruned back and manicured in the centuries since preservation has become more of a priority.

Once I got home with the files, I put them through several layers of processing. First I blended 5 frames into a single HDR file. I loaded that Topaz Labs Impression 2 in an attempt to render the image with “brush strokes.” Conveniently, Impression includes several “Turner” presets, so I started with those and worked them with details that hopefully do Mr. Turner some kind of contemporary justice.

But I didn’t stop there.

When I was in London at the end of the trip, I made a pilgrimage to the Tate Britain Museum, which houses much of Turner’s work. I spent several hours touring the Tate’s Turner exhibit. And, thankfully, they gave no restrictions on (no flash) photography of Turner’s canvases. I took detailed photos of every one, thinking that I might have a use in particular for some of the master’s skies…

Once I was back in Photoshop, I masked the (boring, bright, solid blue) sky out of my Tintern Impression, and made a background layer out of one of Turner’s paintings. So this is a composite of my digitally processed photo and an actual JMW Turner painting.

On the left is Turner’s painting from 1794; on the right, my digital homage from 2017, created with Photoshop, Aurora HDR and Topaz Impression - with a ‘digital assist’ from JMW Turner himself. 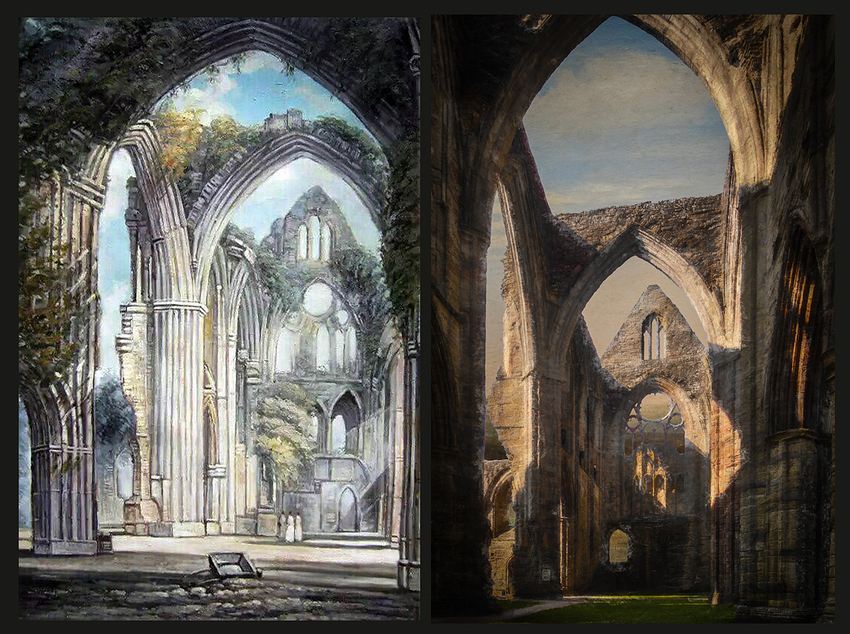 Welcome to the forum!

Tintern and the Wye Valley is one of the most picturesque routes in Wales and a favourite drive. You have done it and Mr Turner great justice.