I created an initial Tri-Map, hit Compute, put the result on a solid color background (for mask refining purposes), went back to the Mask Tab to do some refinements (while on Contrast Mode) and using Blue brushed along the edge of Diane von Furstenberg’s hair to recover some spots the Compute Mask didn’t pick up.

What resulted, in several attempts, were boxy cutouts of my image. See attached two screen snips of 2 different instances of this happening : 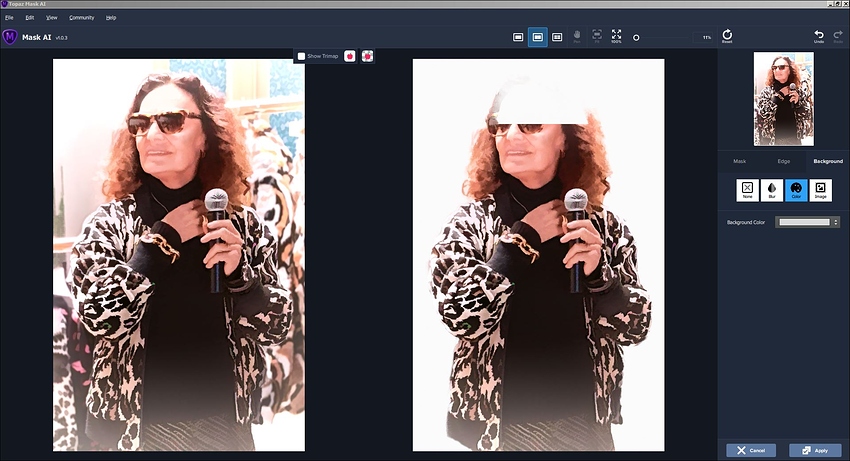 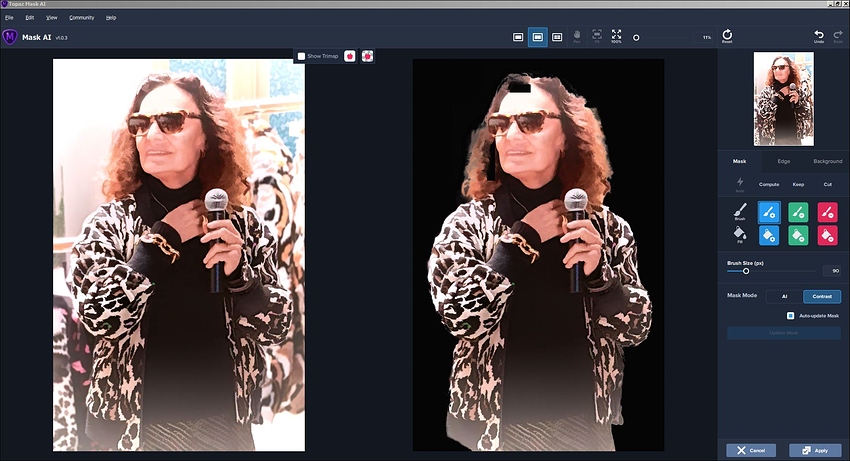 Please post the information copied from the Graphics info in the Help menu. 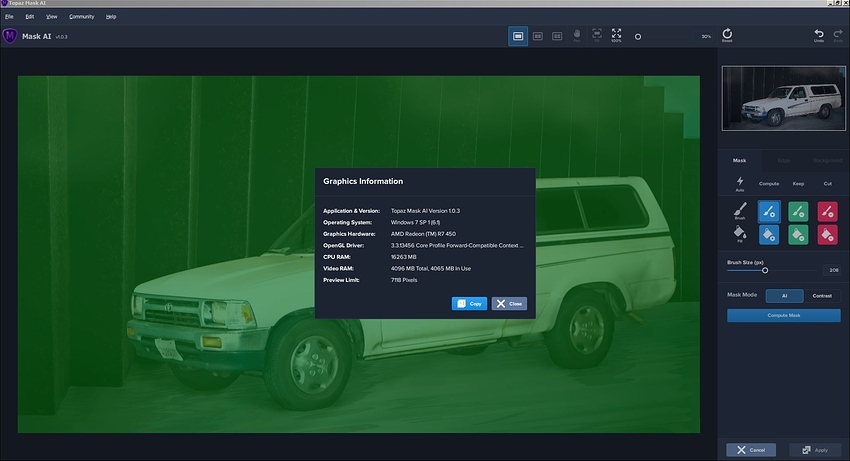 Just copy all the information from the Help-> Graphics info dialog.

I’ve been seeing this as well on a Mac. Adjusting the blue width to accommodate green/red brushes seemed to do the trick. It didn’t happen in previous versions.

On one of my PC’s I get a crash when using the CPU. So they have introduced some changes as it didn’t happen in v1.0.2

Check both CPU & GPU processing before submitting the support request.

I’ve typically left the Prefs settings on whatever these latest versions’ “benchmark” process picked. But I’ll do what you suggest and try the alternatives… Just had never had that happen before and I’ve tried selecting and refining every which way. Including every single time on a colored background in order to see the selections better (since those large, dark transparency squares make it tough to see image details for refinement purposes). Thx for the suggestions.

I started with the standalone & saw it had been set to CPU when I was getting the box chunks noted above (but as I said, I’d left the settings to whatever MAI selected and that situation of square chunks being removed hadn’t happened with prior tests…). So I switched to the GPU setting per your suggestion.

This is what I have it set to now:

I didn’t get the box chunks cut out of Diane when using the Blue brush in Contrast Mode to try to get more differentiation on her curly hair. I tried that mask brushing on both the solid white background and the solid black. Both behaved the same. But the background color is still behind the spots where there are gaps in her hair. It’s much more visible on the black background than on the white: 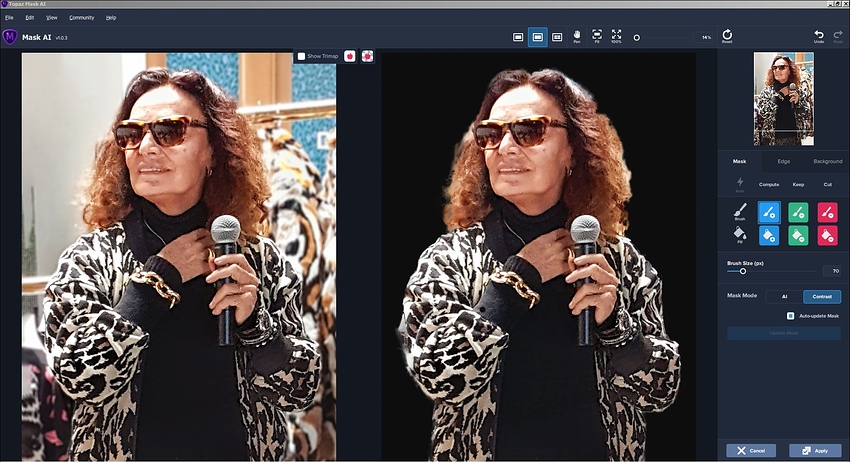 Also, guess I didn’t see it before in the standalone settings (since I primarily use the plugin) but while I was experimenting with GPU vs CPU I changed the options for Ps Layer and Ps Layer Mask in the standalone Prefs. When I went back to my usual Ps (CC 2019) MAI plugin, did the work I wanted to do to test box chunks then Accepted, with the changes I’d made to the Prefs it had put a mask on my Ps layer w/out me having to open MAI plugin with a wht mask on that layer. See the mask layer in Ps: 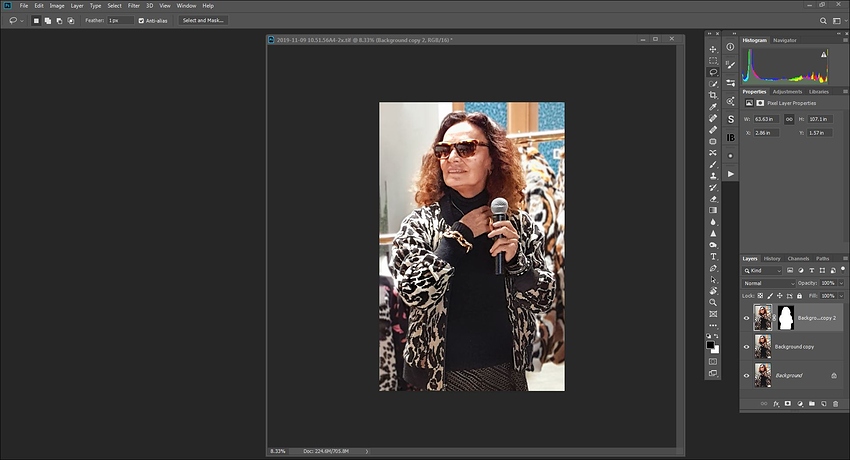 I’ll try again tomorrow. Pretty beat right now. But so far so good in terms of not replicating the boxy chunks being taken out of the image.

I’m wondering if there’s any connection with the transparency squares background when the square chunks were being removed during mask refining with the blue brush in the past few days… Why would GPU vs CPU usage have any impact?

If it’s some kind of pixelated effect then the pixels would have been magnified by orders of magnitude b/c big square chunks were being removed from the image content.

So I switched to the GPU setting per your suggestion.

Fotomaker, your statement contradicts you picture. The picture shows GPU is off.

picture shows GPU is off.

Thx for the heads up. I specifically changed from benchmark image-established CPU to GPU in the standalone version (on the assumption that that was where the controlling prefs are set and would hold for my Ps CC 2019 plugin use).

I wonder if it didn’t hold… When I saw it it was set to GPU highlighted (I assumed that meant ‘on’) & GPU Optimization set to ‘Off’. I didn’t have time last night to see if I set Opt, to ‘On’ if it would help or hurt.

The performance seems to be mostly similar with the GPU Opt. on or off. If anything I’m finding a bit more lag (Win 7 PC, Ps CC 2019 plugin of MAI 1.0.3PR) to the Brush color changes, Brush size changes and Zoom changes via CTRL (+) with the GPU Optimization turned on.

I have not had another occurrence of the blanked out boxes on my test images since that started happening in the past couple days post MAI 1.0.3PR install (with the program selecting CPU for my PC after a benchmark image). But, that said, I’ve had a number of quirks with the program that come & go… so time will tell (for instance, when the plugin opens in my Ps CC 2019 to the default CUT screen over my image sometimes it’s a nice clean fully red screen and sometimes (more often than not) there’s a good enough sized blue circle in the center of the workspace - see ex.): 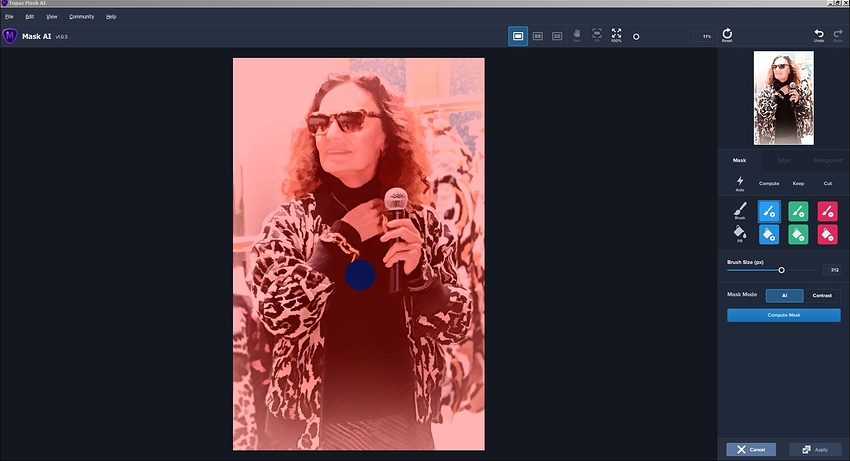 But on this topic of boxy cutouts… I tried 2 images (3 variants) this a.m. - one of Diane von Furstenberg & her frizzy hair snapped with my antique cellphone, one of that same image upsized 2x with GigAI then converted to a cartoonish style in TS 2 (not updated to 2.2!) and a snapshot of a Toronto skyline (to compare hard-edged buildings vs. curly wavy hair with gaps in it using MAI 1.0.3PR. For the skyline I only selected a portion of it (ie, left some buildings out of the mask to challenge the program more if it was intending to misbehave I wanted to see if it would take the bait). Here are some snips. Other than the Tool Lag (with GPU & GPU Opt set to On I didn’t get the boxy bhvr again.

Perhaps after posting these GPU results below I’ll go back to CPU again just for scientific method… I assume GPU is being used even if GPU Optimization is set to off. Yes? No? I want to try again with Opt. on Off to see if the Tool perf lag is less. 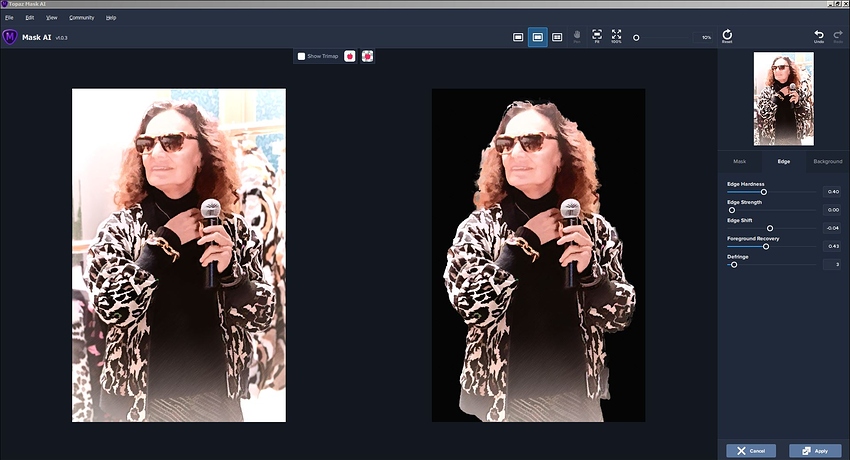 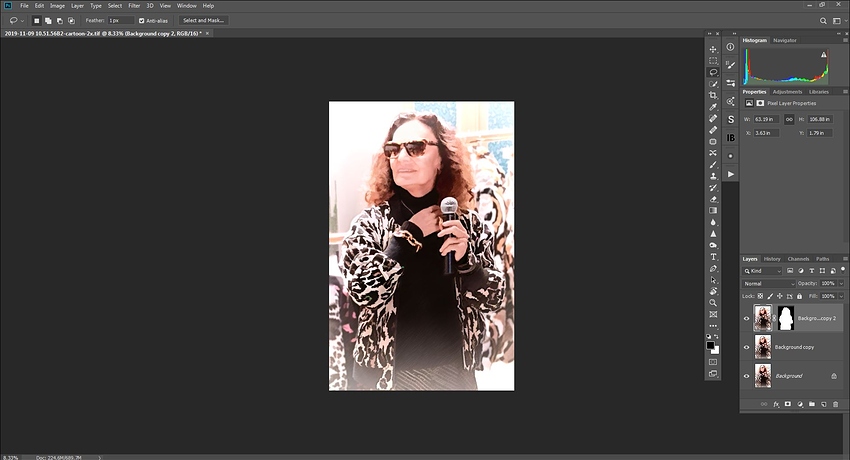 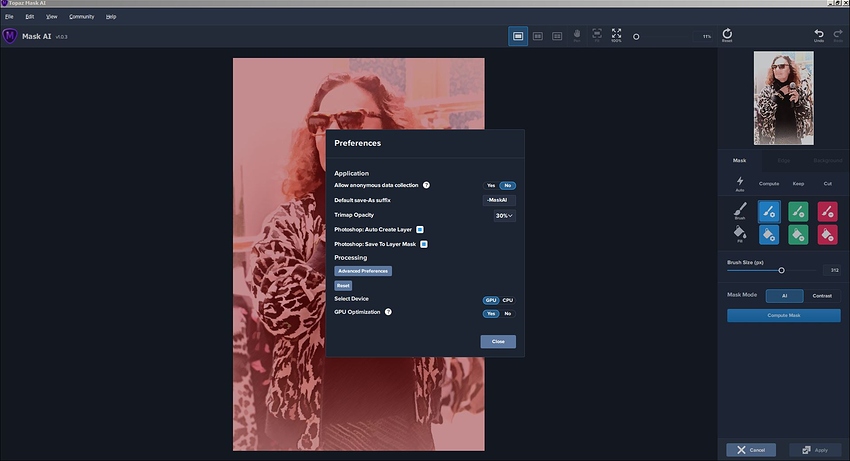 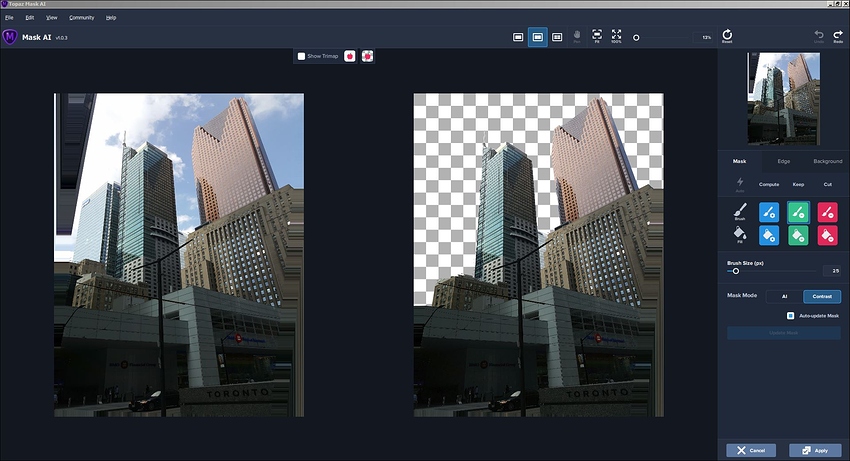 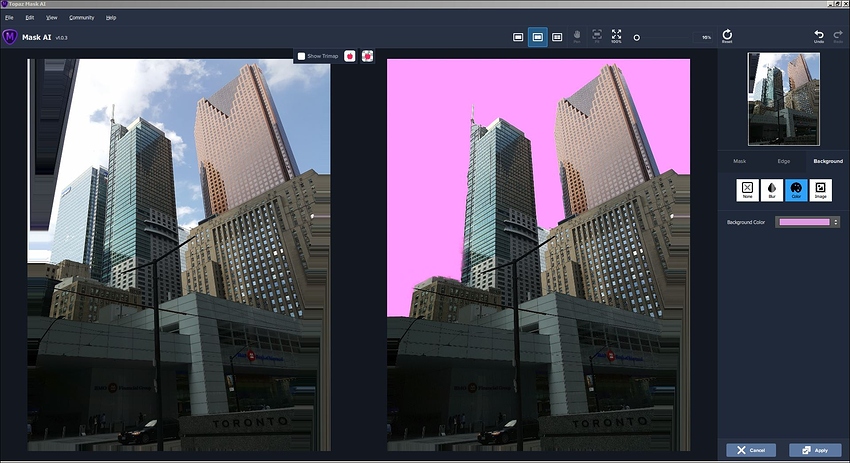 p.s. MAI is getting some pretty good results relative to the edges of my objects tested above. The biggest downside (other than quirks like boxy shaped chunks disappearing randomly) is the inability to get rid of residual background color.

I just tried again with GPU set to On & GPU Optimization set to Off.

I drew my Tri-Map lines (see snip) [the Tools for creating the Tri-Map (Brushes, Zoom, etc.) were definitely responding with less lag with GPU Opt set to Off] and hit Compute. MAI and Ps CC 2019 crashed. Snip of msg I got attached below also. Last night I didn’t get the crash with these settings. Sigh. I think it’s the inconsistency of the perf. (even at comparable settings) that’s really throwing me… (that & the fact it takes 15 secs for my image to open into the Ps CC MAI plugin - should be populated with image upon plugin launch): 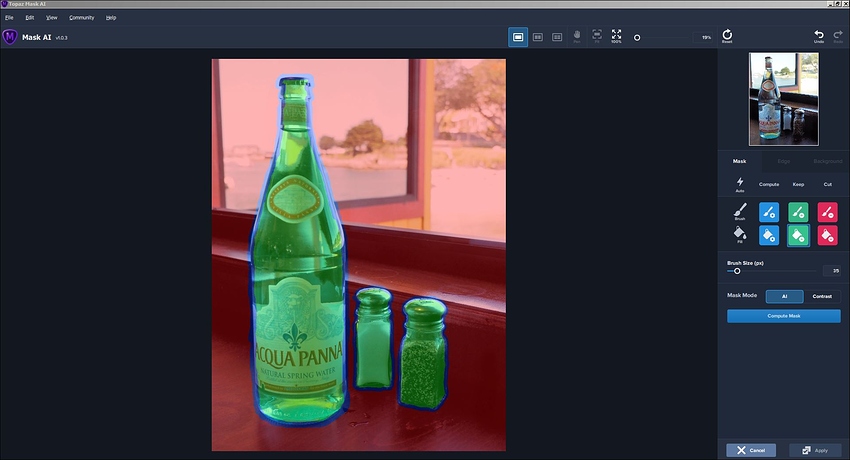 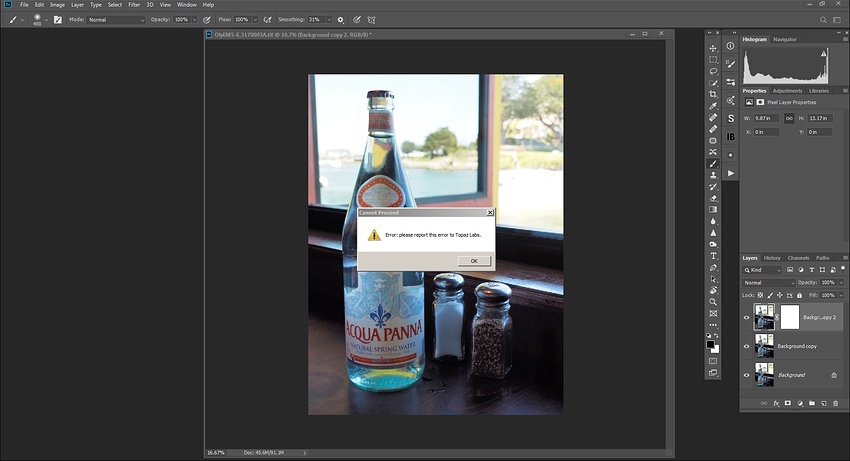 I’m going to try this image again by changing my MAI settings back to the CPU setting they were on when the boxy cutouts occurred to see what happens. BTW, note in the attached snip that post-crash when the CUT screen opened there is no Blue circle in the center this time (as I said, it’s oddly sporadic…):

The Compute time was pretty comparable to the non-crashing GPU time. CPU didn’t cause a crash. But, when I tried to draw one small Red Brush line over the top of the salt shaker to eliminate some of the dark wood in Mask Refinement contrast mode (trying to see if the boxes would appear again) that one tiny (ie very small Brush size) line caused major brown fuzz to appear around both shakers that hadn’t been there before - see snip exs - filenames annotate what I was doing described above.): 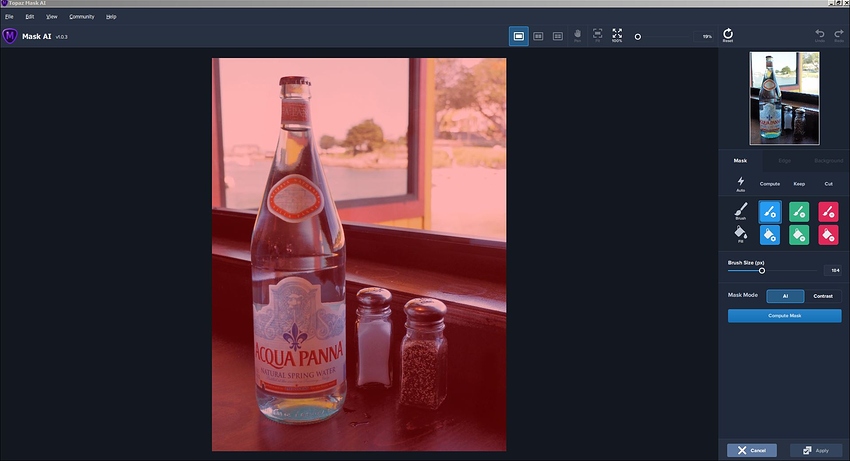 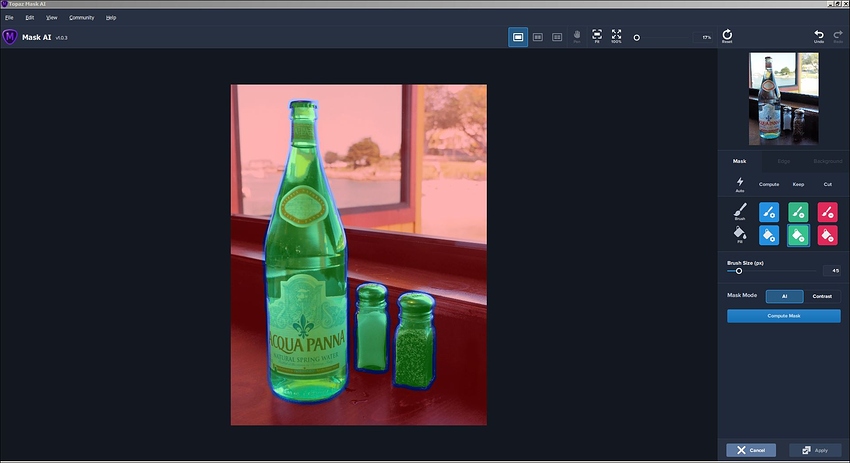 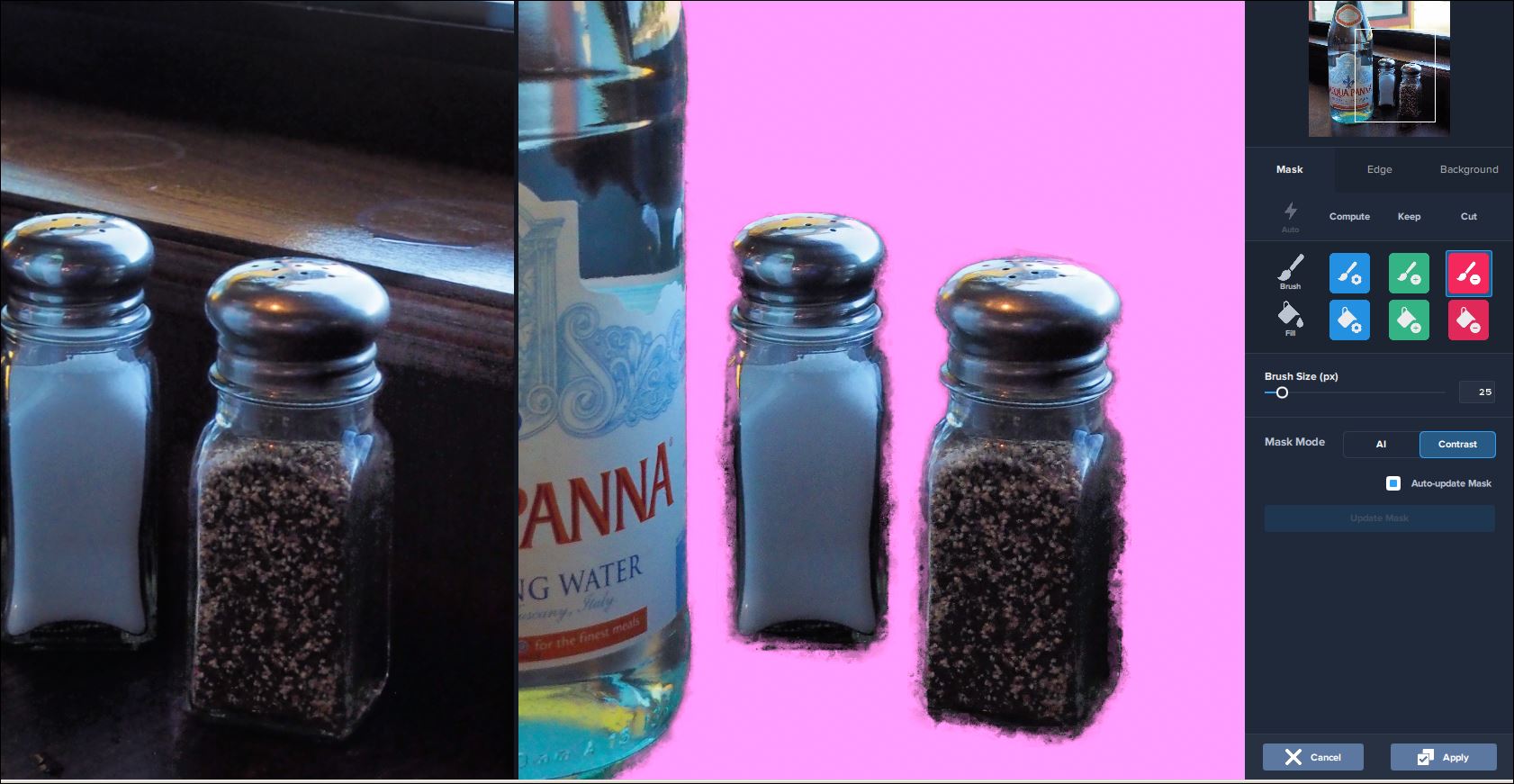