I have created hundreds of artworks with Impression and Impression 2, but I find Impression in Studio 2 to be completely useless. The presets and controls are there–separately–bur it seems impossible to combine them in order to create the same effects as in prior versions. Perhaps this is simply a lack of my understanding of how to do so, in which case a video tutorial would be a great help. Or, perhaps AI is is being used to generate these effects rather than old fashion code. In the meantime, I’ll use the AKVIS products , SnapArt 4, and, FotoSketcher.

It is easier than you think.
The long way around is to
copy the settings from S1
over to S2.

Tweak the settings
and you will see them
resembling your fave
presets.

The presets and controls are there–separately–bur it seems impossible to combine them in order to create the same effects as in prior versions.

I don’t use presets much, so I won’t comment further on that aspect. Regarding the controls, they are all together and organized the same as in the stand-alone/plug-in Impression2. And as far as I know, there was no change in the engine/code of Impression2 itself; it should be creating brush strokes and such the same as always. 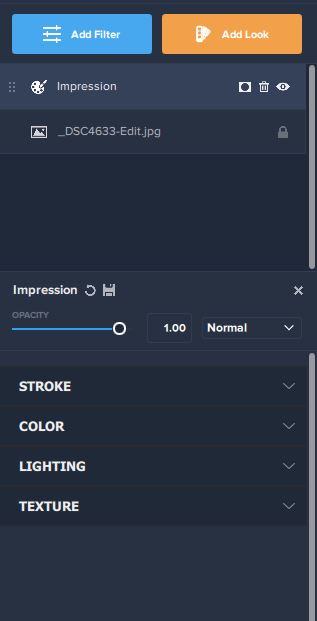 The one exception is the masking function. But that’s available directly on each filter you add in Studio 2. My experience has been that I can duplicate results between the two since they function the same. Again, presets notwithstanding.