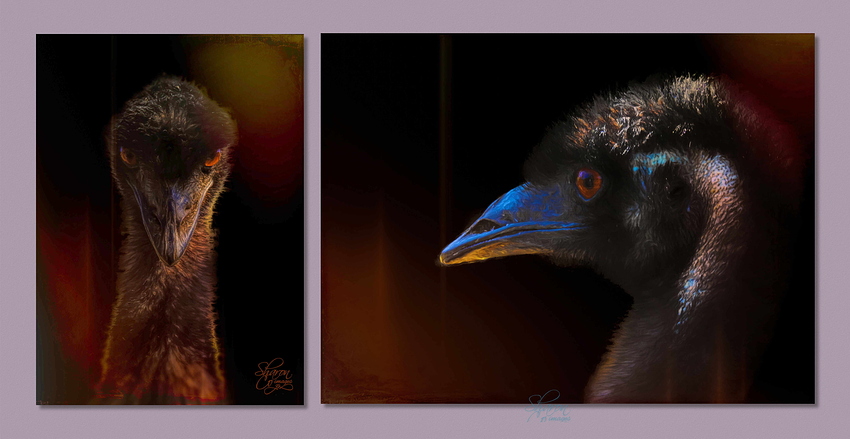 Visited a local zoo. As I was wandering around these two kept coming up to me. It was quite difficult getting shots as they kept moving in so close to me and circling behind me. Figured they probably had checkered pasts.

They do look like shady characters. Do you mean to say they were walking around on the loose?

Great captures and PP work… like the colors, darker tones and bkgds.

Do you mean to say they were walking around on the loose?

Yes, in several parts of the zoo you can wander around amongst the kangaroos, emus and various other bird-life.

That is so cool. I don’t know how I’d feel about those two gangsters following me around though.

Very nice photos and your really enhanced them very creatively!

https://youtu.be/sqrg_VCPgAQ for those outside the UK

Kath, I hope you realise that Emus do not really look like this… Nice, gentle creatures actually as long as you are.

I hope you realise that Emus do not really look like this.

I didn’t but thought they might be since they are allowed to roam free in parts of the zoo. The gangster reference was just in keeping with the “mugshots” storyline.

Kath, Emus are very gentle creatures. Unfortunately they are often killed - just like kangaroos - running across the road at sunset. I’ve seen many deaths of both. Emus tend to die with their bodies down and their legs crossed over up in the air. I know that might sound horrible, but I think the Emu death is much better road kill than the kangaroo. It is more elegant in some way. Hey, a fact of life in regional Australia. And kangaroos wreck cars. Emus bounce off to some extent. A kanga can and has done wreck a car to a write off. And then do it to the second one coming because it is on the road.

I would much rather a squashed snake.