I have been using AI Clear for some time now, and really like this product. In addition to the noise removal, the sharpening of the image is really good.

Last night, I downloaded and activated DeNoise AI. After giving it a try, I do find that it is doing a very good job with noise. But I still like the results I am getting from AI Clear due to the sharpening that it is doing. I will continue comparing the two, but right now, I just hope AI Clear doesn’t go away.

This is confusing, as it appears DeNoise AI is a replacement for AI Clear, which was new only a shot time ago. After using both, I think I prefer AI Clear as the results seem the same as DeNoise AI and the interface is easier.

Some of their recent releases seem to be integrated into Studio, but others are not. Or they are found in different menus of Studio.

Also, their interface in inconsistent. For example, some products allow a split screen view of the before and after adjustment image. Others only have a button that switches between before and after (they all should probably offer both options).

Topaz seems to have no coherent strategy. I think most of their products are useful, but many overlap functionality and that makes it difficult to decide which you should buy. And the inconsistent interface, especially when it seems Studio is supposed to be the hub for all their new products, seem like just lazy design.

I agree with what the previous speakers said. A.I.Clear is a very good tool and I personally prefer it.
As far as I realized, DeNoise A.I. is strictly to eliminate image noise from photos taken with a high ISO in a low-light situations (with an photo camera).
But A.I.Clear is useful for ANY IMAGE, even the images is already processed or modified.

As a result, I will prefer to continue using A.I. Clear.

Also, their interface in inconsistent. For example, some products allow a split screen view of the before and after adjustment image. Others only have a button that switches between before and after (they all should probably offer both options).

I thing you need to also consider the purpose, JPEG to RAW AI doesn’t need any previews, GigaPixel AI doesn’t need a before after as it shows the before and after side by side, and Studio, Denoise AI and Sharpen AI have both.

It is GigaPixel AI but AI Clear and AI Remix are Adjustments in Topaz Studio and not standalones.

I just tried to look at what AI Clear has to offer, but when I click on it under pro-adjustments available for Topaz Studio is sends me to the DeNoise AI page. Is AI Clear no longer available as a pro-adjustments?

The latest version of DeNoise AI is now v.1.0.2 and I have found that it is improved over the original v.1.0.0. I can now get results similar to what I get with AI Clear. But it is a lot slower.

I just did a comparison on my PC. My CPU is 8 core and running at 3.5GHz with 16GB of DRAM. The GPU is NVIDIA GeForce GTX 970 which is using 4GB VRAM memory.

Using a 24M pixel image, I find the following which represents the time to write out a file:

No sooner had I posted than I now see v.1.0.3. Just loaded it and DeNoise AI using the GPU now ran in about 45 sec.

Don’t know what else has changed with this release.

I am wondering the same thing? is A.I. Clear no longer be supported and updated? I really liked A.I. Clear and it wasn’t that long ago that I purchased it. They really need to communicate to their current customers as to what is happening going forward!

They really need to communicate to their current customers as to what is happening going forward!

They have already given DeNoise AI as a free update.

I did not know about this? When did this happen? All I received was an e-mail that it was available and I could buy it for a reduced price. How can I get it? Update: never mind I found the e-mail in my spam folder! can’t believe I missed this! Thanks

I’ve been using the DeNoise before I use AI Clear. DeNoise does a better job at cleaning up the noise then Clear does. But I have noticed issues. For example, I feed DeNoise a raw file (Nikon) and let it do it’s thing. Now what? Since it’s not integrated with Studio, I can’t run A.I Clear on it without first saving it. Unfortunately, your options are limited. If you try to save the file for continued work in Studio and want to keep it RAW, then DNG is their recommended solution. The problem being if you go that route, when you open your file in Studio, it has a huge red tint. OK, so you try JPG format instead. When you open it in Studio it is darker than the original by at least 50%.

One other thing Topaz Labs should consider, NO MORE DEVELOPEMENT OUTSIDE OF STUDIO! What’s the point if you have to keep working in and out of Studio to get your end result? The whole selling point of Topaz products and Studio was to have an integrated package with all the extras like masking, undo, modify, etc. With all these extra stand-a-lone products, those no way to work back to the original file – especially when forced to save in different formats along the way. Having said all this, I still love the results I get from the Topaz products. (UPDATE: I have since learned that I CAN do most of this in Studio now-- so disregard about 50% of this paragraphs. )

I’ve been using the DeNoise before I use AI Clear. DeNoise does a better job at cleaning up the noise then Clear does. But I have noticed issues. For example, I feed DeNoise a raw file (Nikon) and let it do it’s thing. Now what? Since it’s not integrated with Studio, I can’t run A.I Clear on it without first saving it.

DeNoise AI is available as a plug-in from Topaz Studio. Open your images in Studio rather than directly, Studio will send an image to DeNoise AI then use File->Save or Ctrl+S to return the result to Studio.

Thank-you! I have totally missed that in the plug-in’s. I do notice it works a lot slower this way, however-- at least 50% on my machine. And, as my raw files are all in the 50-90MB range (compressed!), you can see it can take some time for each change I make in Studio.

A new version of Denoise AI coming out this month (May) will include AI Clear model so either can be selected.

I look forward to the inclusion of the AI Clear model in Denoise AI - I too think it is far superior at this time. That said, the other thing that AI Clear benefits from in being incorporated into Studio is the ability to apply itself to a batch of photos at one time.

On a related note, I applaud Topaz Labs for embracing the use of Artificial Intelligence in their products and in particular, Neural Nets, to improve the quality of their output. However, I do think a ‘fall back’ algorithm should also be made available in the event that the current AI model does not produce a quality output. The balance between the use of AI advancements (and more capable GPUs) must be balanced against producing a quality output 100% of the time otherwise, it is difficult, if not impossible to utilize a product in a high volume, tight deadline professional environment.

Thank you Topaz Labs for continuing to innovate, I look forward to what comes next! 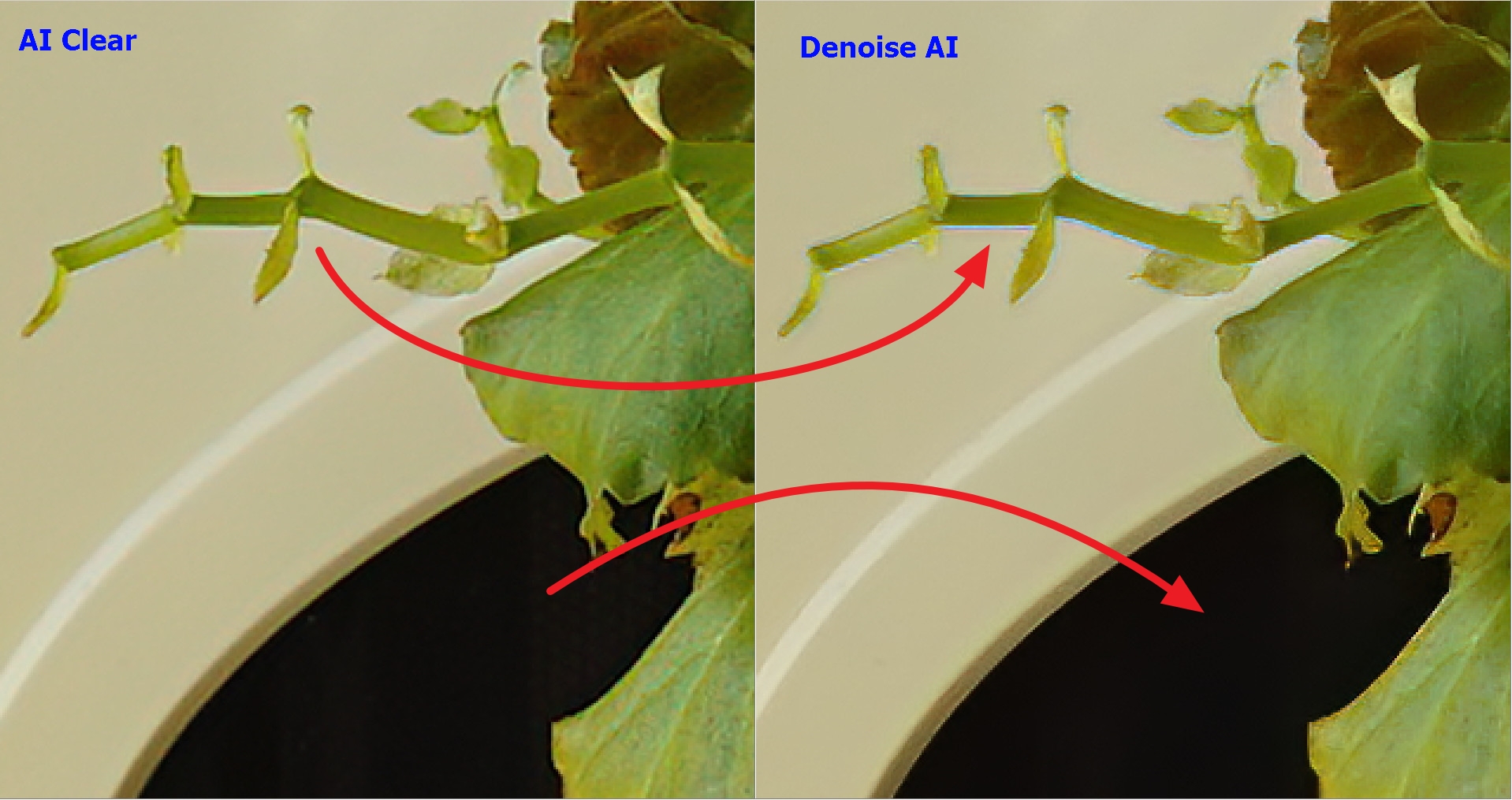 Even if AI Clear maybe is not always as “spectacular” like Denoise AI,… the AI Clear it processes the image more accurately, without chromatic aberrations and without eliminating or changing whole parts of the image!

Even if AI Clear maybe is not always as “spectacular” like Denoise AI,… the AI Clear it processes the image more accurately, without chromatic aberrations and without eliminating or changing whole parts of the image!

As of tonight, version 1.1.1 is now out and includes AI Clear within DeNoise AI. Have only tried it on one picture so far.

I see your haloing edges. I am using the latest download which is now available tonight, ver 1.1.1 and I cannot produce the halos. Don’t know if it is now fixed? I am even trying to do it on dark twigs with a bright sky behind it.

Also, AI Clear is now accessible within this release. 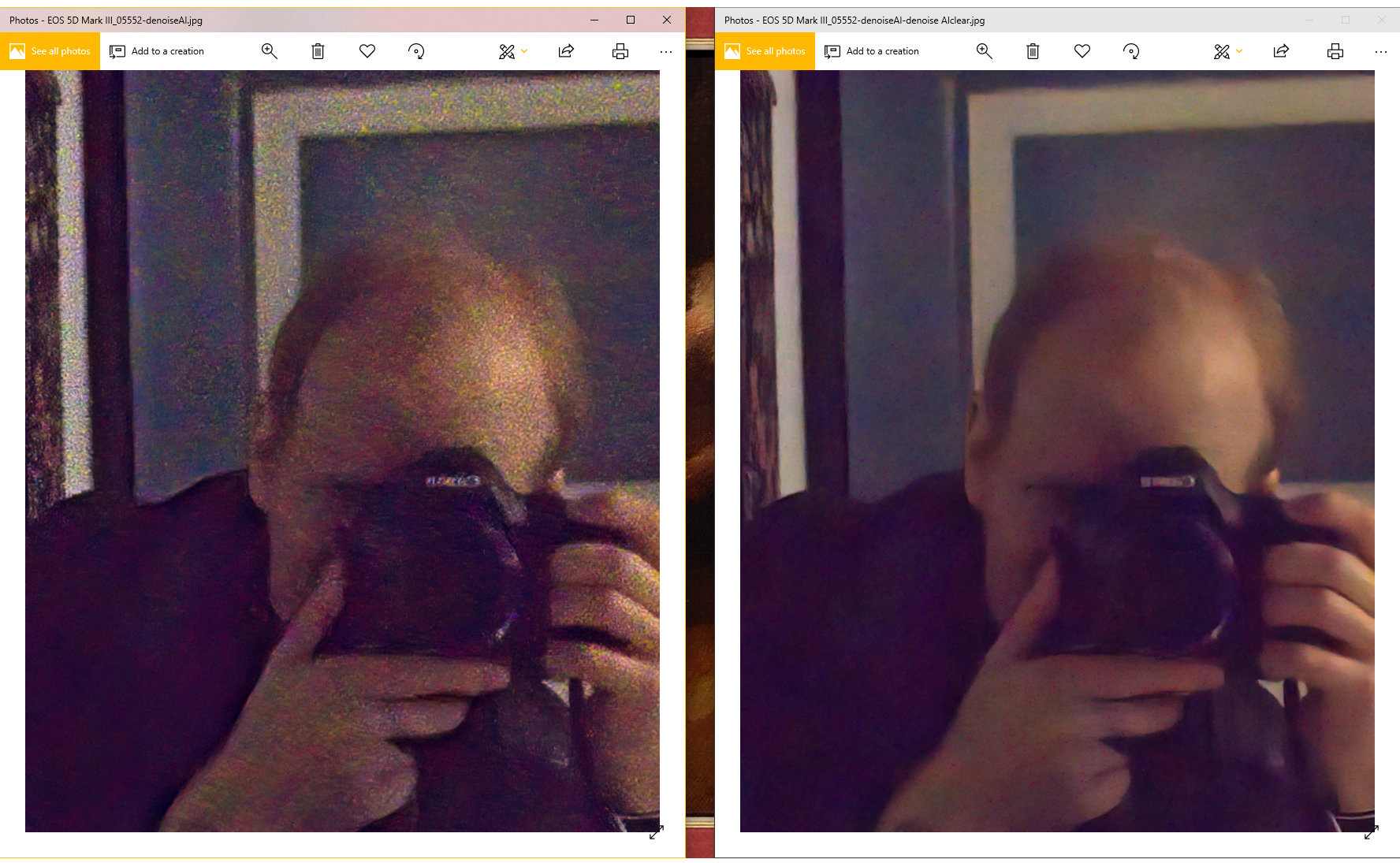 I just found out about the new “Denoise AI” today and tested it on a Canon 5D3 Raw file shot at ISO25600.

Comparing it to “AI clear” (which I LOVE) I must say I am anything but impressed by the new one.

See the comparison, which is the raw file loaded in “Denoise AI” and then choosing between the 2 algorithms.

AI clear is, in my opinion, clear, while the new denoise fails completely.