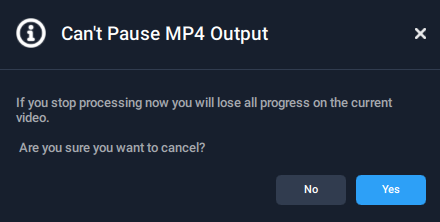 You wouldn’t guess by reading this warning, but the program actually does make an attempt to save the progress when you hit Yes. I’ve tried it on several videos and the only problem I’ve had is that the audio is always missing. Otherwise, the resulting files still seem to work in video editors and media players.

I’m not saying you can just hit Yes and it will work out for you all the time. This is NOT a supported feature or anything. I’m just saying VEAI does appear to make an attempt to save the file, and that the dialog window should probably reflect this. As it is right now, it reads like VEAI is just throwing everything out. I think it could be better to say something like “An attempt will be made to save the progress, however the result may be corrupted or otherwise unusable.” That way at least people are aware there’s going to be a video file and that it may be broken.