I’m planning to get a new graphics card for my home workstation because my current one doesn’t have tensor cores and FP16 capable hardware, so I need some numbers.

Today comes the Radeon Pro W6800, this card is equivalent to a RX 6800 and performance wise it will be between the RX 6800 and the RX 6800 XT, unfortunately AMD “only” offers FP16 hardware and no Tensor cores.

The other model or models would be the RTX A4000 & RTX A5000, both models are very fast as they have tensor cores.

I can estimate the performance of the Nvidia models, but not the Radeon Pro.

Does anyone have perfomance numbers with the RX 6800 or 6800 XT from Denoise, Gigapixel & Video AI created with the current engine so that I can make comparisons?

In November 2020 a seller did a test for me with a W5700 and it matched almost a RTX 6000 in performance although it is actually much slower on paper (with Denoise AI).

But, i found a slide.

Now I would need to know if the Navi based cards can handle GPU multitasking well so that you can use multiple programs at the same time.

I would have taken the Radeon Pro VII in November but it stutters in GPU multitasking because it prefers compute and not graphics.

Just numbers on paper anyway. No real performance from that.

Since VEAI uses tensor cores, I believe Nvidia GPUs are better than AMD.

Same as the Tensor Cores

VEAI claim to support Tensor Cores since v1.7.0, but it is only on paper, because some users have pointed out that they see no performance gain from the Tensor Cores. VEAI may either not using it or not fully optimize yet.

Don’t get me wrong,

I am hoping VEAI can further improve it performance and better optimize RTX3000 series GPU & Tensor Cores to increase processing speed. But at the moment, it seem not fully optimize yet.

It would be great if Topaz can provide some official benchmark on GPU, so it can help users to choose the best optimized GPU for VEAI.

At least a $300k car should not be driven by a 12 year old kid.
A $1000+ graphics card should be able to run with a mature driver.
Since Nvidia has CuDNN which is very well-known and AMD has RocM which is… “what is that”. Tensor cores are meant to boost the performance of machine learning workload. The reason why you don’t see much improvement is the models. If you want to see real improvement, use Gaia models. Artemis models use more CPU than GPU. Gaia models take advantages of the GPU seriously. It’s not because of Topaz team, it’s more like about the AI models only. But the new customization model might need more GPU than ever. And AMD GPUs are not suitable for ML. At least for now.

Yes, I agree. Training AI model is better on Nvidia GPU than AMD GPU, but we are end users, we do not use the GPU to train a new AI model.

If I remember correctly, VEAI has changed from “TensorFlow, CUDA & cnDNN” to “ONNX Runtime and DirectML” since V1.7.0 to add support to AMD GPU.
DirectML-based ONNX Runtime support both Nvidia GPU & AMD GPU.

For example, here is a graph from “Landmark Tracker AI”. 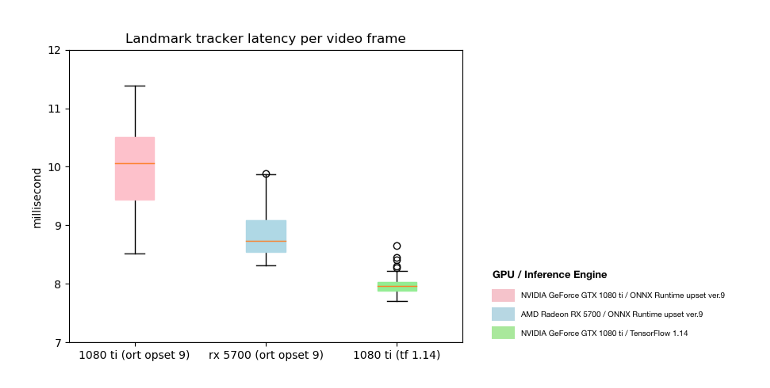 Landmark Tracker used to use “TensorFlow, CUDA & cnDNN” the latency was 8ms per frame (1080Ti), but they switched to “ONNX Runtime and DirectML” to add support to AMD GPU, after the change latency has increased to 10ms, and a slower AMD RX5700 get shorter latency 9ms per frame.

VEAI may work differently, but saying Nvidia GPU is better than AMD GPU may not always be true, when they are both using ONNX Runtime with DirectML.

As I pointed out before, it would be great if VEAI can officially provide us some benchmark on GPU, so we don’t have to guess the performance.

oh that’s why many people with older GPUs have noticed a slowdown, because of the latency.

And if you block the download of the models you are at the old speed, the models are still available in TF.

Your chart doesn’t really say anything, since I don’t think 1080ti didn’t had Tensor cores. I can say that switching from a 1080 (not TI) to a 3060ti reduced average processing time from 1.4 seconds/frame to 0.4 seconds/frame. Of course, that’s also upgrading from gen 2 CUDA to gen 3 CUDA, so that has some effect as well (not to mention faster VRAM and wider memory buss).

since I don’t think 1080ti didn’t had Tensor cores.

The Pascal Gen Gaming has not a Single Tensor Core and can’t also calc FP16.
(Only the GP100 had tensors and FP16)