I tested the initial Gigapixel release using my Mac mini and filed perhaps a half-dozen defect reports. In general I was not terribly happy with how the software ran on my Mini although I thought that the resizing was done well. I was in the process of buying a Mini replacement and it came in just as the new Gigapixel version was released so it took me until today to get the new Mac up and running properly and be able to test the new version.

My first comment is that Gigapixel feels like a completely different product when run on a machine that meets the requirements for the software. It runs well on the MacBook Pro, images get resized in reasonable amounts of time and most of the defects I reported or saw reported appear to be fixed. I am much happier with the new version of the software overall, and especially how quickly images are resized on my new machine.

I still have one issue and that is the way Gigapixel handles raw images. The previous version desaturated the raw images and I am still seeing noticeable degradation in image quality if I use a raw image.

Other than that my reports have apparently been addressed.

I have had the desaturation issue with both raw files and processed images. It’s very disappointing. I’m hoping there will be a remedy, but at this point, I’m using ON1 Resize

That is interesting because I did not see the issue with my processed images. That is, I ran some raw images through my workflow tool (Dxo’s PhotoLab) and generated 16 bit tiffs. I then loaded those into Gigapixel and upsized them to jpgs and when I compared the pairs (tiff and jpg) at “fit screen” size I could see no difference in the color.

AdobeRGB was the color space for both the input file and for output. Wonder if there’s an issue in handling AdobeRGB. It was quite a noticeable difference in vibrancy between the original and the output files

Here are by sRGB images. The tiff is the original and the jpg is the output from Gigapixel. I loaded the screen shots into PS, labeled each and layered them so that you can see both parts at the same time. The difference is almost non-existent, at least to my tired old eyes. 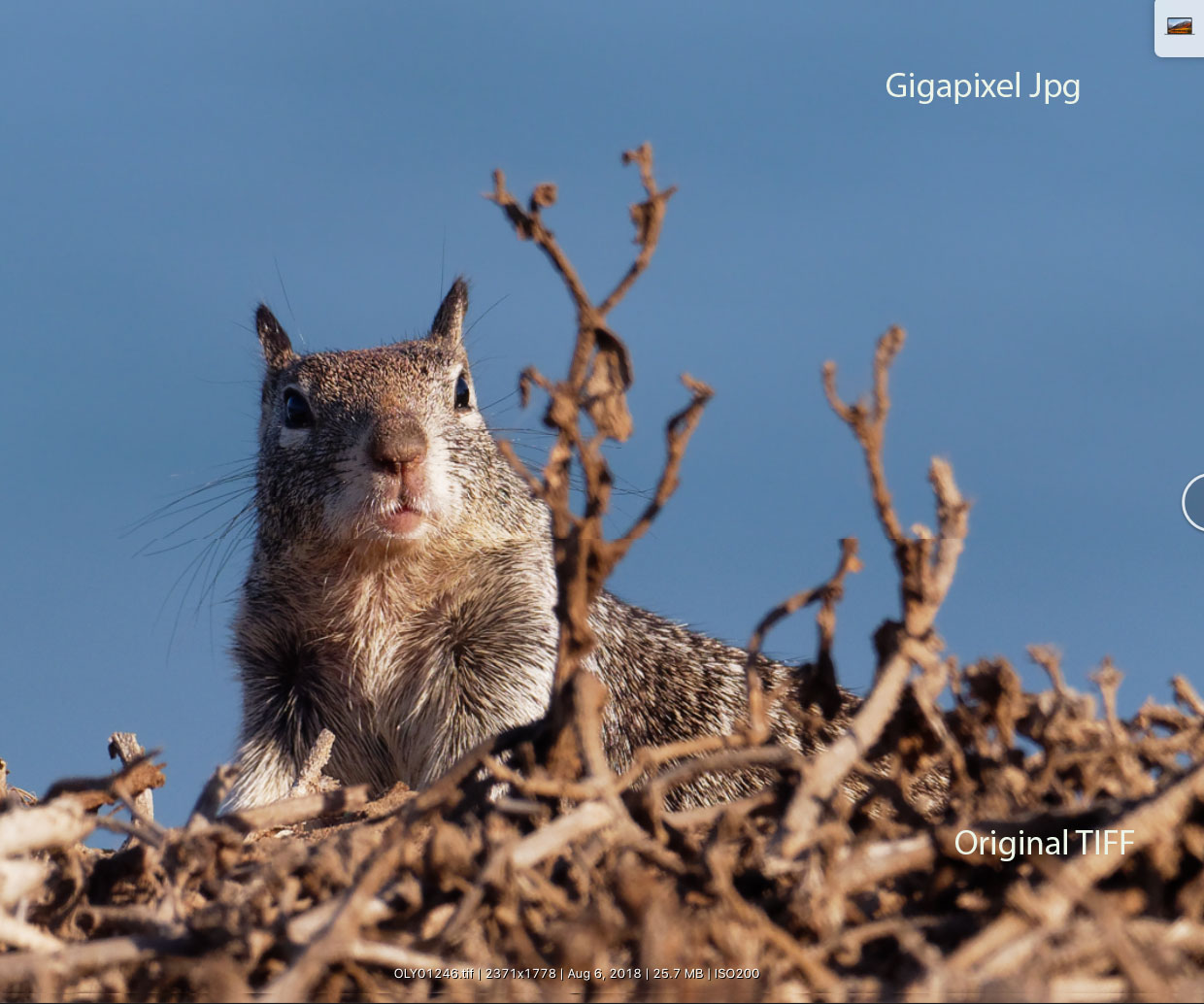 You might want to convert your Adobe RGB to sRGB and then run the test, just to see if you still get a difference.

After experimenting, I find that Adobe RGB files processed through AI Gigapixel always loose vibrancy very noticeably, whether the output is to AdobeRGB or sRGB. I can convert the original to sRGB and then the output shows no detectable difference–but I’ve lost my preferred colorspace.

My suggestion about using sRGB was not meant to suggest that you should change to sRGB. It was to test if the problem was related to the AdobeRGB color space. You have done that and we now know a bit more than we did before.

I am getting the same. I just bought Gigapixel; my first effort worked well. However I am now trying to scale up a tiff. I first saved it as a jpeg in Studio, then scaled up that resulting jpg in Gigapixel. The output image is dull and muddy, has lost brightness as well as colour.

Does anyone know what is causing this?

Color profile being changed has been addressed in the A.I. Gigapixel 1.1.2 update. Please update, thanks!